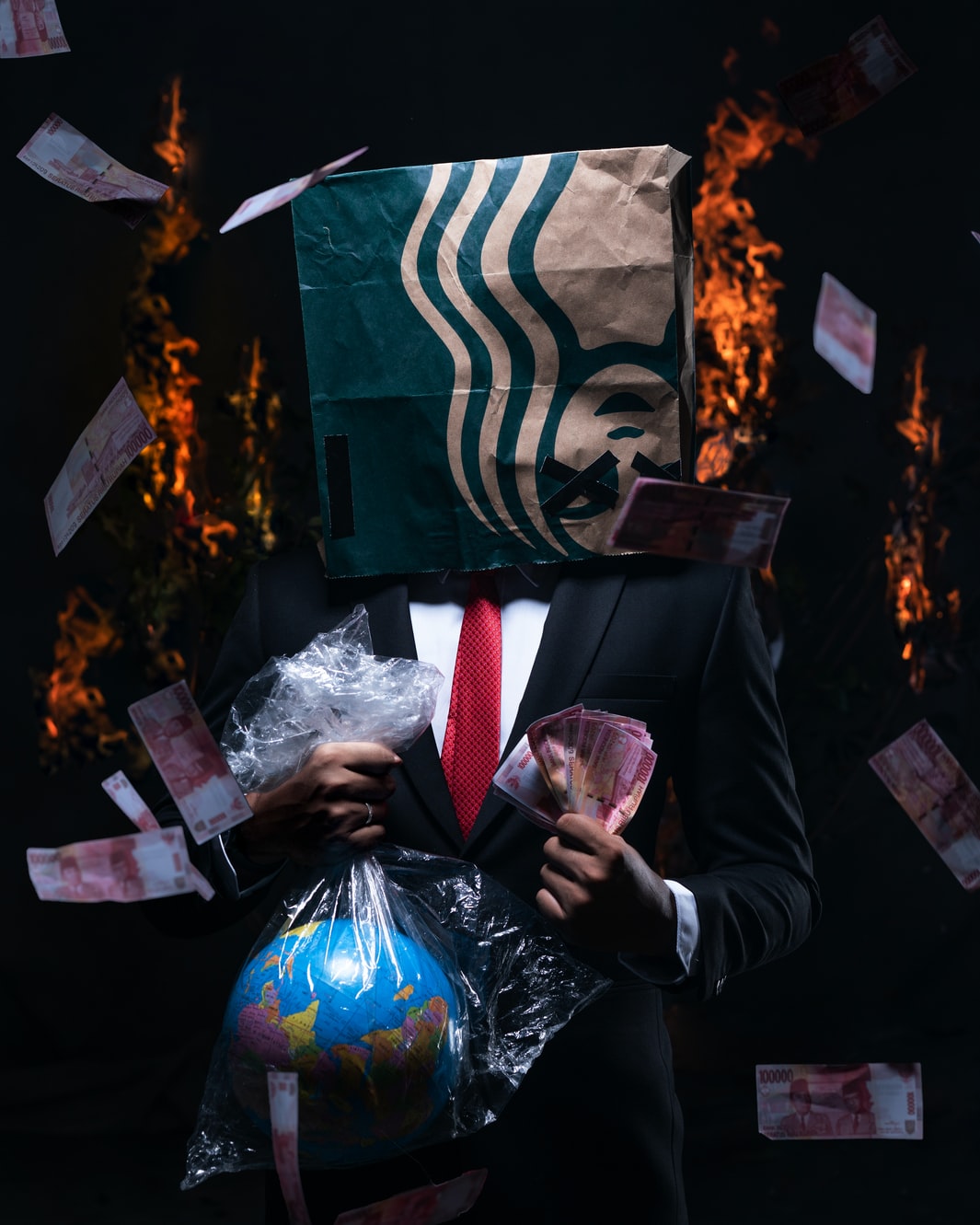 By Clint Broadway, guest writer from this year’s GSD competition

Our interactions with each other and the world around us have always been governed by currency. Whether it be the Mesopotamian shekel, used to pay mercenaries in the 6th century B.C, or computerized dollars, which have erected immense corporations more influential than most countries, currency has been idolized over morality and ethics.

Regardless of religious beliefs, the role of Judas in the New Testament demonstrates how the shilling plays on the innate greed of mankind. Judas’ actions resonate in the recent betrayal of people around the globe during the covid-19 pandemic. Indeed, governments worldwide were sluggish in their response and reluctant to compromise their economies in fighting the virus. This capitalist fixation on profits poses a major threat to the environment we live in since being sustainable is not profitable in the short term.

On my way back from school on Tuesday night, I took a deep dive into Morrison’s reduced section. The standout item was a 300g packet of Chicken breasts, for the modest price of 90p, considered loose change by an increasing amount of us. However, behind the 90p label lurks a significant environmental cost: over a gallon of water is used for every gram of chicken produced. This represents a significant strain on a resource which is still unavailable for much of the Global South. That being said, chicken can be considered a “sustainable” alternative to red meats like beef, which requires ten times the resources used to produce chicken, and leads to the emission of roughly 30kg of CO2 per kilo. Yet beef continues to be sold at deceitfully low prices.

Companies are committed to pushing the boundaries of the natural world in order to gain an advantage over their competitors. This is highlighted explicitly within the fossil fuel industry. In 2019, JPMorgan Chase provided $75bn to companies engaging in fracking and Arctic oil and gas extraction, a field vastly unsustainable. Both extraction techniques are desperate attempts to extend the lifespan of a decaying fossil fuel industry, associated with a high level of risk and waning long-term rewards. Despite commitment to such industries seeming bluntly counter intuitive, investment banks continue to pump dollars in, in an attempt to squeeze blood out of the proverbial stone that is the Earth. Sustainability aside, pushing experimental and quite literally ground-breaking technologies in these areas can and will go catastrophically wrong. The 2010 Deepwater Horizon oil spill was a culmination of greed and ill-fated ambition, resulting in historic damage by all metrics. On the 20th of April 2010, a BP leased rig in the Gulf of Mexico found itself destroyed by a surge of natural gas which ruptured the concrete seal over the well. Reserves of natural gas then ignited within the rig, killing 11 people and injuring 17. By the 22nd of April, the 100,000 square foot rig was toppled, releasing an estimated 210 million gallons of oil off the coast of Louisiana. It would later be discovered that BP had taken numerous shortcuts to minimise expenses and had ignored prior warnings on smaller scales, for instance a 2008 incident in the Caspian Sea which shared many similarities with the 2010 event. The rigs’ ‘fail safe’ blowout preventer also failed, resulting in an uncontrollable release of oil and gas, permanently scarring the Gulf’s ecosystem. Regardless of the crooked methodologies of BP momentarily, why must we, as a species, bore down 9 kilometres into our planet in search of a finite resource, when we are aware of an energy source which will forever exist above us in the sky for the next few billion years, and which is much more sustainable?

Unfortunately, much of the environmental mutilation we cause goes undocumented. The Deepwater Horizon spill can be used as a metaphor for humanity’s impact on some of the most beautiful and diverse biomes, beneath the surface of our oceans. We have pillaged our fish stocks, forcing species like the Bluefin Tuna to the brink of extinction, and causing some experts to predict an end to seafood halfway through the century. The coral reef now faces a gruesome reality, as a result of rising ocean temperatures and acidity, stemming from carbon emissions. Since the Industrial Revolution, the acidity of our seas has risen by 30%, stunting the growth of coral skeletons. More damning perhaps is the impact of temperature change, disrupting the majority of species on Earth. Alterations to sea conditions pressure colonies of polyps which make up coral networks, causing them to reject the algae which give coral the energy to grow and reproduce. The impact of this is the eerie phenomenon of coral bleaching, which leaves the organisms vulnerable to disease, deconstructing the habitat of 25% of marine species, which long term could mean that. The deflating truth is that this unseen desolation will likely only warrant a half-hearted snivel from the corporations and governments holding all the cards. We have lost approximately half of our coral reefs in the last 30 years and yet the majority of the global players have kept their powder dry and regrettably this is not just true of the oceans.

It is hard to imagine a future where most TNCs spring into action before their consumer bases are hit in the UK and other high-income countries. With the cushion of distance from the Equator and Tropics, the responsibility will be on these countries to avoid repeats of the immoralities which have plagued their past, exploiting their planet and their neighbours who are at greater risk. The topic of currency highlights a tradition of misuse and ill treatment within the old colonial powers. When Europeans arrived in Africa, existing trade networks were limited. Upon discovering this, settlers took remorseless advantage through the use of culturally valuable beads, making away with goods worth intrinsically more than the beads themselves produced at a low cost in Venice, including other human beings. Now, in the 21st century, low lying island nations like Kiribati are on their knees as victims of our high consumption as we reach an ethical fork in the road. We can ignore those less fortunate than us, or we can make changes to the way we live, and the way our TNCs operate. It may be too late for Kiribati, which has been consumed by the ocean to the extent that its main island can no longer cope with the flux of homeless citizens this has created. The Kiribati population will in all likelihood be among the first waves of environmental refugees, however the country has committed to significant economic concessions, sacrificing a prosperous commercial fishing industry in a message to the rest of the world. This globally microscopic and yet meaningful commitment sets a precedent for the ravenous Western economies, pleading with them to give their nation and our planet a fighting chance.

And yes, our planet does have a fighting chance. As consumers, we have the power to divert the ebb and flow of demand through adjustments to or daily routines. 2016 computer models suggested that removing red meat from the world’s diet could cut food related emissions by 60%. Furthermore, up to 80% of pastureland could be returned to the native biomes which predate mankind. This scale of amendment has its draw backs, including a huge initial investment, disruption to the lives of millions who work in agriculture and a lot of disgruntled supermarket shoppers. In all honesty, it is an utterly surreal scenario, but it demonstrates the ability of the people to wrestle our future away from the omnipotent corporations at the head of our means of production.

Through investment into new greener technologies, sustainability is becoming increasingly economically viable, making the UKs new legal pledge to have cut emissions by 78% by 2035 (relative to 1990 levels) look somewhat believable. One of the few redeeming qualities of the Capitalist model is its support of innovation. Investment by governments and private investors will only accelerate improvement in fields like sustainable energy production. We have already seen landmark victories on theses fronts, such as the development of Perovskite solar cells, able to convert the sun’s rays to energy more efficiently than their silicon counterparts, whilst being far more flexible. Glasgow could soon see the UK’s largest electrolyser, which promises to provide up to 8 tonnes of green hydrogen each day, as part of the ‘Green Hydrogen for Glasgow’ project, led by Scottish Power. These alternative technologies create modern competition for fossil fuels in the transport industry, and for hydrogen in particular this is a marked improvement, since as of 2018 95% of hydrogen fuel was produced using fossil fuels.

In conclusion, no matter how narrow a definition for sustainability you use, it is clear that we must make societal changes to our daily lives as consumers and far more broadly within our political ideologies in order to protect the Earth. Roughly half of the global population live under some form of democratic regime. Going forward, it is critical that we elect leaders who will drive us towards the UN’s sustainable development goals.